I'm a Scientist: Supported by Wellcome and UKRI
Skip to content

About I’m a Scientist

I’m a Scientist is like school science lessons meet the X Factor! School students choose which scientist gets a prize of £500 to communicate their work.

Scientists and students talk on this website. They both break down barriers, have fun and learn. But only the students get to vote.

This is the Extreme Size Zone. It has a range of scientists studying all different topics. Who gets the prize? YOU decide!

The Extreme Size Zone is funded by the Science & Technology Facilities Council. 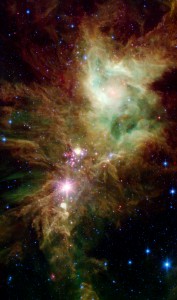 Newborn stars in this image of a section of the Christmas Tree Cluster from NASA’s Spitzer Space Telescope. The newly revealed infant stars appear as pink and red specks toward the center. | Image: NASA/JPL-Caltech/P.S. Teixeira (Center for Astrophysics)

There are parts of this universe — most of it really — which exist on an unimaginable scale. This zone will look at the very, very small and the very, very large.

Cells and DNA are small, but what exists in the spaces in-between? The spaces between genes? What’s the smallest thing you can imagine? Perhaps an atom; everything’s made up of atoms, but what are atoms made up of? Protons, neutrons, and electrons? And they’re made of quarks, but what’s a quark, and what’s it made of? How much further down can you go?

The whole universe is made from tiny, tiny particles; planets, stars, whole galaxies. All made of the same tiny particles that make you. Scientists in this zone are looking at the very tiny, and the very large. From genes to planets, from bosons to the cosmos.

Students, this is your chance to ask the scientists anything.

Once you’ve registered using the link on the card that your teacher gives you, you can ASK questions to the scientists.

Click this to visit the ASK page, where you can ask the scientists your questions.